Learn how to make a perfect crispy pork Schnitzel or original Wiener Schnitzel the way my German grandmother taught me.

Jump to Recipe Rate this Recipe
5 from 55 votes

Schnitzel or Escalope is a thinly pounded slice of meat, which is usually breaded and fried in fat. It is a popular dish in many countries, such as Germany, Austria, Poland, Italy or France. The original Wiener Schnitzel or Schnitzel Viennese is known around the world. As its name indicates, it was invented in and named after the city Vienna in Austria. In Germany and Austria, the name Wiener Schnitzel is protected and can only be made with veal. Schnitzel made of any other meat is Schnitzel Viennese Style.

In Germany and Poland, the pork Schnitzel variant, so a Schnitzel Viennese Style is more popular. Provided you like pork, it is a much cheaper alternative and is very tasty. Since I grew up in Germany, the pork Schnitzel is what I am most familiar with. However, every so often I opt for the veal instead. This recipe is based on my grandmother's and it was my grandfather's absolute favorite dish. He would have probably eaten it 7 days a week if possible. I remember there were weeks where my grandmother, who I call Mena, made it up to 3 times a week!!! And YES, it is that good! 😁

These are the main ingredients you will need to make your Schnitzel. Detailed measurements can be found on the bottom of the page in the recipe card 👇.

Bread Crumbs - Nothing special, I buy pre-ground bread crumbs at the local bakery or in the bakery section of the grocery store. I do not buy industrially pre-made breadcrumbs or seasoned breadcrumbs.

Milk - Just regular milk or if you try to avoid/reduce dairy like we do, use unsweetened almond milk.

Flour - Any flour you have available. My go-to is whole-wheat spelt flour, just because that is the standard flour I use.

Salt, Pepper & Nutmeg - These are the seasonings you'll need for your Schnitzel.

Lemon - 🍋🍋🍋 There is ONE important rule! No schnitzel without fresh lemon juice topping!!! At least not for me. Of course, this is a personal preference, but trust me. You want to drizzle fresh lemon juice over your hot and crispy Schnitzel. Mmmmhhhh - so good!😋

Now this one is important. If you want to avoid uneven browning of your Schnitzel with darker and lighter patches, you have to use the right amount of oil as well as the right oil.

A traditional Wiener schnitzel should be fried in clarified butter (or Ghee). Clarified butter is butter that is skimmed of solid particles and water, leaving only pure butterfat. Why? Well, if you have ever used butter for frying, I am sure you noticed the burnt particles in the fat once the butter reaches a certain temperature. Those are the solid milk parts burning. It will stick to the breading of your Schnitzel and give it black sprinkles.

Pure butterfat is an oil that can be used for frying at high temperatures without burning, which is what we want. Now, using 100% butterfat is not only not very healthy but also expensive. (Tastes great though!!!) That is why I usually use canola oil or sunflower oil and for the taste, I simply add a spoon or two of butter or clarified butter.

There are multiple options you can choose from. For an original Schnitzel Viennese (Wiener schnitzel), veal cutlets are your only option. Here in Canada, it is not always easy to get what is called here "white veal". The veal meat here is often more on the light red side. The one you would want for Wiener Schnitzel has more of pale pink color, like pork chops. Also, veal meat can be fairly pricy and pork is, therefore, a much cheaper option.

If you don't like pork and would still like to go with a cheaper option, I would recommend chicken or turkey breast. The steps for preparation would be the same, but when you flatten the meat, be gentle with the meat tenderizer. The meat structure of chicken or turkey is less dense and may fall apart quicker.

Whether you decide to make your Schnitzel with veal or pork, I highly recommend purchasing meat from the back of the animal, so the pork loin or veal loin. You can buy schnitzel which is already flattened for you at your local butcher, BUT the meat will most likely be from the topside, which is from the leg. The meat is more stringy and I, therefore, prefer to buy boneless pork or veal chops and cut and flatten the cutlets myself.

Some people may tell you that Schnitzel should be made from the topside. Well, try both and decide for yourself what you like better. 😊

How to make Schnitzel

How to Flatten the Meat

You will need a tool to flatten the meat. I use a stainless steel meat tenderizer but you can also use the bottom of a pan as an alternative. The meat should be flattened very thinly, to the point where it is almost translucent.

Remove the fat on the outside of the veal or pork chops. Most of the time, the meat is cut about 1 inch thick (2.5 cm), which is a bit too thick for our purpose. That is why I cut it in half horizontally against the grain, into ~½ inch thick (1.25 cm) slices.

Next, place one piece of meat at a time on a board and flatten the meat as shown in the video below using the meat tenderizer or the bottom of a pan. The meat should be roughly 2-3 mm thick. In case you wonder why my hands look so masculine, Tom is responsible for the meat tenderizing 😉

How to Bread Schnitzel

This section provides instructions for a perfectly breaded Schnitzel. I start with setting up my Schnitzel breading line, consisting of 3 containers.

This is what the breaded Schnitzel should look like. Make sure that the meat is evenly covered with crumbs with no visible "wet" spots. This will ensure a crispy and even crust all around.

How to Fry a crispy Schnitzel

I usually use a wok pan, which allows me to use less oil overall since it has a smaller diameter at the bottom. In addition, the higher rim provides protection from splashing oil. The Schnitzel has to float in oil for an evenly colored crust. If the meat touches the bottom of the pan, your Schnitzel will have patches of the dark crust where it touched the pan due to higher temperatures and light spots where the meat was floating. As a result, the Schnitzel will not be evenly crispy.

What to serve with a Schnitzel

Potato Salad - Any type of potato salad will go well with a Schnitzel. Check out this recipe for my German Potato Salad with bacon and sweet tangy dressing. The original Wiener Schnitzel made from veal will often be served with a potato salad in a mustard and vinegar based dressing, topped with corn salad ("Vogerlsalat") and a few droplets of pumpkin seed oil. Absolutely delicious!!!😋

French Fries and a side salad is popular as well.

German Fried Potatoes - In case you never had it, those are slices of boiled potatoes, fried with onions and (optional) some bacon. A great way to make use of leftover boiled potatoes!

Schnitzel in a Bun - Great for road trips or a quick lunch sandwich is a Schnitzel in a bun with coleslaw and/or mustard. This is actually a popular German street food.

MY ABSOLUTE FAVOURITE! My grandmother's Cucumber Salad and salted potatoes - This is the combination I grew up with and my grandfather's favorite! A crispy Schnitzel with sweet and sour cucumber salad and simple salted boiled potatoes. For me, it is and will always be the best way to pair a Schnitzel. 🥰

I personally prefer the classic version of pork or Wiener Schnitzel as described in the post above. But there are multiple different Schnitzel variations and I am going to list here the two most popular ones.

The Hunter's Schnitzel (Jägerschnitzel) is a classic schnitzel topped with creamy mushroom gravy with onions. After the classic Schnitzel, this is my second favorite, especially during the mushroom season in the Fall. Yum!!

The Balkan Style Schnitzel is a classic schnitzel topped with a tomato based sauce with bell peppers and onions, which can be more or less spicy. 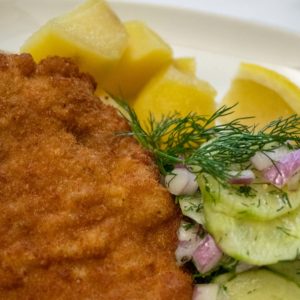 How to fry the Schnitzel

Recommendations for the Meat

Find additional tips and detailed instructions in the blog post above!

Tell me what you think and leave a review! Cancel reply

Welcome to my blog, I am so glad you are here! I am Lexa, a German national, living in Toronto with a passion for delicious and healthy food. I am happy to share my favourite recipes with you, hoping to inspire you for your day-to-day cooking or a stay-in date-night.

We use cookies on our website to give you the most relevant experience by remembering your preferences and repeat visits. By clicking “Accept”, you consent to the use of ALL the cookies.
Cookie settingsACCEPT
Manage consent

This website uses cookies to improve your experience while you navigate through the website. Out of these, the cookies that are categorized as necessary are stored on your browser as they are essential for the working of basic functionalities of the website. We also use third-party cookies that help us analyze and understand how you use this website. These cookies will be stored in your browser only with your consent. You also have the option to opt-out of these cookies. But opting out of some of these cookies may affect your browsing experience.
Necessary Always Enabled
Necessary cookies are absolutely essential for the website to function properly. These cookies ensure basic functionalities and security features of the website, anonymously.
Functional
Functional cookies help to perform certain functionalities like sharing the content of the website on social media platforms, collect feedbacks, and other third-party features.
Performance
Performance cookies are used to understand and analyze the key performance indexes of the website which helps in delivering a better user experience for the visitors.
Analytics
Analytical cookies are used to understand how visitors interact with the website. These cookies help provide information on metrics the number of visitors, bounce rate, traffic source, etc.
Advertisement
Advertisement cookies are used to provide visitors with relevant ads and marketing campaigns. These cookies track visitors across websites and collect information to provide customized ads.
Others
Other uncategorized cookies are those that are being analyzed and have not been classified into a category as yet.
SAVE & ACCEPT
Powered by